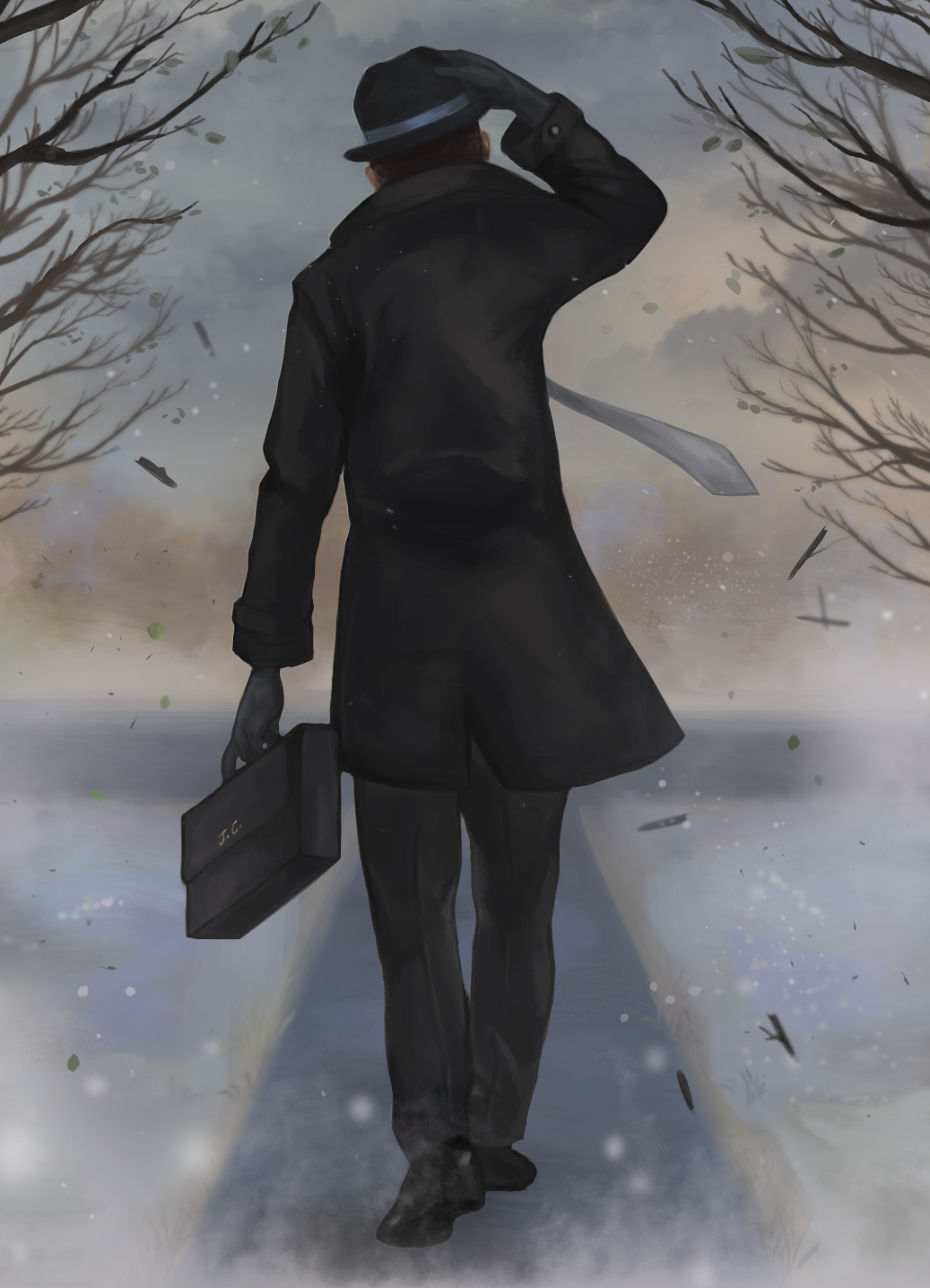 Clutching his case with his left hand and holding onto his hat with his right, J.C. looked across the road toward the heath. The snow was starting now, twisting through the gorse and dusting leaves still clinging to their boughs for fear of where the wind would take them next. It was only a matter of time, J.C. decided, before the wind would nab those last reluctant leaves, forcing them to migrate into the unknown.

A moment earlier, as he’d exited the building, J.C. had quickly checked his watch.  It had just gone three o’clock. His appointment was at four. He still had time to make it.  Mind you, he hadn’t been expecting the snow to fall with such ferocity and likely hold him up. But then again, it wasn’t the snow’s fault, was it?  It was the doing of the English wind which battered all things in its wake. If he’d known the walk ahead was going to be so strenuous, he wouldn’t have left his car in town. But it was too late now.  He had no choice but to brave the brrrr and bluster of the elements on the one-hour trek to his appointment.

Hesitating at the edge of the road, J.C. trusted that Wren Underhill, the agent would wait for him if he should take longer than anticipated. He didn’t even know if Wren was male or female. Two days prior, when he’d called the agency, the receptionist had simply told him, “Don’t worry. We’ll send Wren out to meet you. Four o’clock. Tuesday. On the morning of, I’ll text you to confirm.”

J.C. already knew he didn’t have reception on his mobile in the Mistwell countryside so he wouldn’t be able to call the agency to let the receptionist know he might be late.  For the first part of his journey, at least the wind would be behind him, pushing him along. But then, when he turned left, it would come up against him, needling his left side with snow, elbowing him into the centre of the road. By the time he reached Wren in the meeting place, he’d be a tousled mess. Acknowledging that, he flinched. There was nothing he loathed more than to show up anywhere unkempt.

J.C. paused, listening to the wind rushing through the gorse.  It swished toward him, then receded, crescendo-ing and decrescendo-ing like waves upon the sand.  He recognised the simile and thought about the ocean.  And thinking of the ocean, he thought of seaside things: pony rides and fish and chips, sandcastles and Punch and Judy, rainbow rock and soft ice cream.  And then, he thought about the huts which lined the beach, just beyond the reaches of the tide.  He remembered taking cover in his family’s hut, standing in his sandy footprints, shivering whilst his mother dried his hair, the sea view vanishing and reappearing as the towel up-and-downed over his eyes.  And then, he thought about those afternoons when rain had heckled him into the shelter and, sitting cross-legged on the floor, he’d watched the crowds thin out, then disappear.  His mother would slide a flask into his hand, and through the steam which drifted from the rim, J.C. would watch the raindrops turn the gold sand brown.

Glancing at his watch again, J.C. shook his head as if to shake the memory from his mind.  What was he thinking?  Beach huts?  On a day like this?  What a preposterous image for his brain to cough up in a snowfall.  Or not.  For after all, for him at least, the rhythm of the wind had always paralleled the heartbeat of the sea.  Upon hearing one, how could he ignore the other?

He couldn’t, he decided then.

And for an instant, he experienced an overlap: a collision of two pictures.

With his mind’s eye, he saw the beach hut hemmed with sand, but sitting out of context in the heath stretched out before him, its little clapboard body haloed by the gale-blown snow.  The vision only lasted for a second before it faded, taking seaside memories with it.

Rocking back and forth on his heels, J.C. refocussed on the present sounds, on the howling of the wind, then the snow which whispered through the brittle grass and naked branches of the heath. And it was strange, for in that isolated place, his ear attuned to nature’s voice, he felt as he’d been feeling as of late: as if he’d been there in another life. Even in that moment, he half-expected a horse and carriage to come rattling past and for the driver to tip his hat in passing.

Two years ago, J.C. never would’ve felt this way. However, the unusual position he’d found himself in had changed his way of thinking. What had begun twenty-four months prior as purely professional had now become intensely personal. He couldn’t pinpoint it, but somewhere along the line, J.C. had started sensing he was in a story over which he had little control, if any.

At first, he’d resisted the sensations, the visions, the déjà-vu, clinging onto tenets he’d always clung to: logic, reason, proof. But as he stepped onto the road that afternoon, he saw himself like the last of the autumnal leaves hanging for dear life onto the winter boughs now bending.  He, like them, was subject to a bigger picture, a deep, inevitable cycle. He, like them, was on the brink of letting go and seeing where the journey was about to take him.

He felt change in his bones. Everything was coming together; the pieces of a story which, until quite recently, he never knew he had, were falling into place.