In this chapter, you have the previous chapter’s scenes, but this time as told in the first person by Justine.

It was never about George for me.  Even at our deepest turn, our tenderest moment, it was about his father.  That night, the night we were first together, when we were standing by the coat rack and he put on my cloak, I remembered how, years before, Greg had done the same, dragging his kiss from my nape to the quarter moon of a shadow behind my ear.  In that moment, it was Gregory who kissed me, Gregory who held my shoulders, Gregory who pressed against my spine.  I felt him there inside his son.

I was afraid to follow my instinct, to let my body guide me.

But my body didn’t care; the impulse, fierce, took over.

And I clawed at George’s clothes, dragging him like some poor prey onto the landing where I stripped him bare before I stripped myself and watched him harden in my shade.  Deep down, I knew I was about to use him, transpose him into someone else.  And I prepared him for that moment, descending upon him like a raven with its wings spread wide and beak half open.  I covered him and rocked him into place, then dis-impaled myself and turned as not to see him.

Without George’s face, I could see Greg more clearly.

In thrust and gasp, son and father were the same.

This, what I was doing, was in defiance of that thought.

It went against Sid’s sinking flesh, rebelled against Greg’s bones.  You’re still alive, was what I kept on thinking as I watched my knuckles whiten.  You’re still in George—in—George—in—George—and then I felt myself begin to surge with overwhelming memories of my sexual youth, recollections which I didn’t deserve; I was unworthy.

I pushed my body back and sent George reeling.

And we spasmed around absolutely nothing.

After our episode on the landing, when George and I were sitting by the fire, I felt revived.  We had defied death, clawing at each other’s mourning clothes, tearing of the layers of black.  But that defiance had been futile as we clutched each others’ bones, aroused by skeletons foreshadowing our graves.  Our mortality had been inside the body parts that delegated so much pleasure.

As I sat opposite George, I was aware of my allure, a pull inseparable from the accoutrements of mourning.  And whether it was wrong or right, I loved that dark sensation. 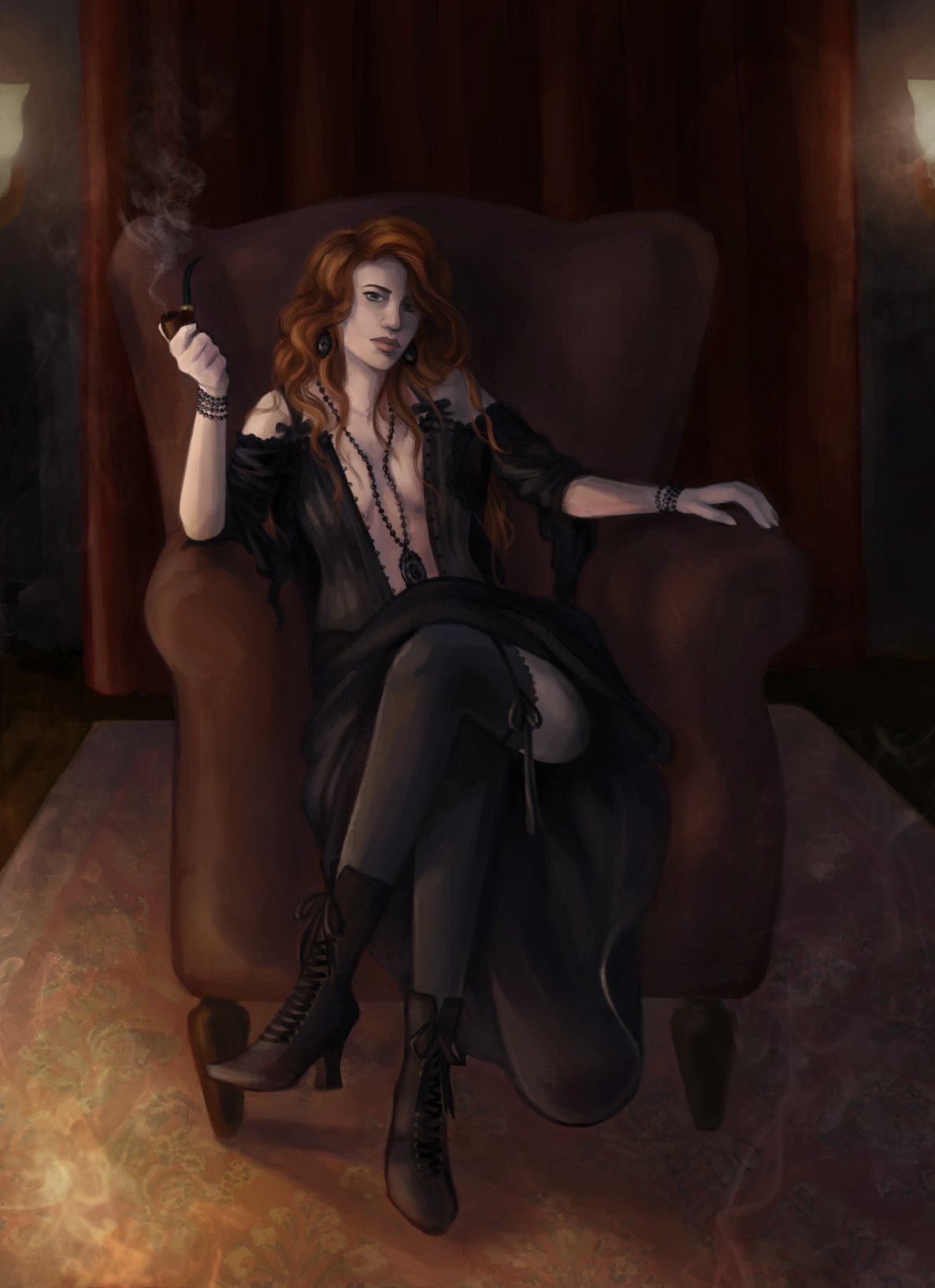 I was smoking, I remember.

I loved that I was smoking.

I felt the pipe, my fingers around the stem, my tongue against the mouthpiece.  I felt the instrument release as I drew in and pause as I exhaled.  I loved the ‘in-and-out’ of that, the sensual ‘to-and-fro’, the hardness of the stem against the softness of my skin.  And I remembered Seymour, how he’d taught me that we make love to inanimate things like clocks and floorboards, chairs and ribbons; we bring them in until they are extensions of our flesh, turning into spasming shadows and lightwaves shuddering.

That night, through narrowed eyes, I watched the soft grey waves collapse mid-spiral, making way for other soft grey waves which were my breaths made visible in the room.

I listened to George tell me I reminded him of marble with the darkness rippled through it.

I noted that he liked my cruelty, that it made him yearn for more.

And knowing that, I gave him kindness, the opposite of that for which he’d asked.

Rising from my chair, I went to him and gripped the arms of his, leaning down and issuing him the softest kiss my mouth allowed.  His upper lip received it aching, wanting pressure so, I barely grazed it with a half-breath.  When his tongue sought mine, I moved my mouth onto his throat and let my mourning locket swerve over his fly which I then opened as he handled my breasts before he gripped my shoulder blades, hoping they would sever his lifeline in half. 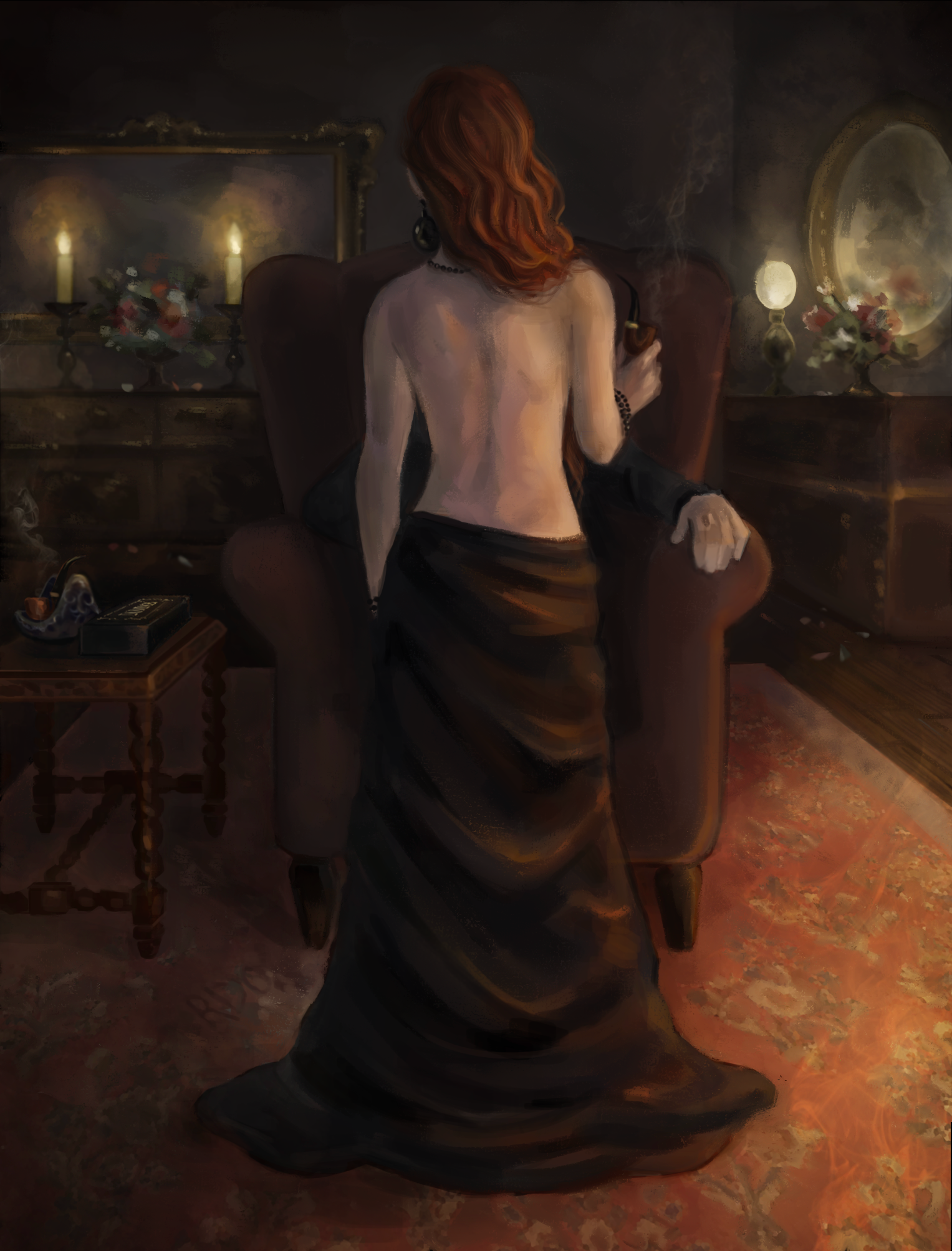 My skirt descended of its own accord and there I was again with him, impaled and half-delirious with the act impending, knowing I’d be tender when he wanted harsh, knowing I’d be attentive with caresses, considerate with each contraction; I’d embrace him to the very end and swallow every last sweet inch of him until he pleaded for a tiny shock.

Kindness was the punishment that time.

He stayed clothed, but I was naked, save the jewellry, boots and stockings.

He begged for the unthinkable again, for me to steal that final cry.

I held him close – and kept him joined – moaning lovely words in answer to his call for injury and insult.  He couldn’t help it.  He scaled the edge I brought him to.  I raked him over my sweet coals until he groaned in anguish/pleasure with the soft rose hit he shunned and wanted.   It was too much for him.  I could feel it as he spluttered out my name in bits and pieces as his father had.

I kept on keeping on, lock-rocking him despite his plea for me to stop, a supplication undermined by his hard body on the brink of giving every drop of pleasure it had.

To see him through my half-closed eyes asking me to take away the very thing his body wanted was a high like I had never had.  It brought me to my own sharp edge.

But I did not.

He had no choice.

Overriding his words, I answered to his body, nothing else.

I felt him say amen beneath me.

And I died with him, understanding what it’s like to hang between the word and action, but in the end, to pledge allegiance to behaviour over language.  With George that night, I chose the short-lived motion of the human body.  Words can live forever on paper, but sexual climax is too exquisite even for the best of stories.