Seeing as I’ve been buried in 1849-50 for months now, I thought I’d come up for air yet again to give you another update on some story developments as well as on some things that are happening with the project as a whole.  As I stated in some previous posts, my plan was to work on developing George’s first-person narration voice.  I got about twenty pages into that then found myself back in Justine’s story, filling in the many gaps I needed to make George’s section work.  The result? A much longer Justine story thread than I’d planned. So, here are some of the things I’ve been dealing with in the past few weeks.

There are some fictional legalities that have arisen with regards to Foxglove, Bertie’s cottage which later becomes the place where Justine raises Sidney, the place where she’s still living at the beginning of the story in 1873.  These legalities are rapidly becoming non-negotiable to the plot of the whole novel and are bringing Foxglove forward as an indispensable setting in the story, a setting which will have great meaning not only to Justine throughout her life, but also to Phil in modern day.  Researching British Victorian real-estate law is not an easy task as there is very little information surrounding it.  And I don’t want to dive into the research rabbit hole at the expense of getting on with the story.  That said, I do need to get my Victorian real-estate basics right in order to make the Foxglove component work which, after what I’ve discovered these past weeks, will work.

As much as I’ve loved Bertie as a warm, motherly character, I’ve had to give some storm clouds to her silver lining and, unlike the Phil/Jeannie thread which is up for the chopping block, Bertie’s character shift is not.  She’s far more useful to the inner workings of the story as a complex figure.  As a person who finds herself in the middle of other people’s dramas, she also finds herself privy to those people’s secrets, secrets which can be used to bribe others later. In the chapters you’ve not yet read, she is already manipulating characters to benefit herself.  And yet, within her underhandedness, she ends up helping Gregory, Justine and George.  If I keep Bertie as a quaint little person who likes to make cakes and bergamot oil, she becomes nothing more than a warm, fuzzy story accessory; she must have a purpose, a reason to be. 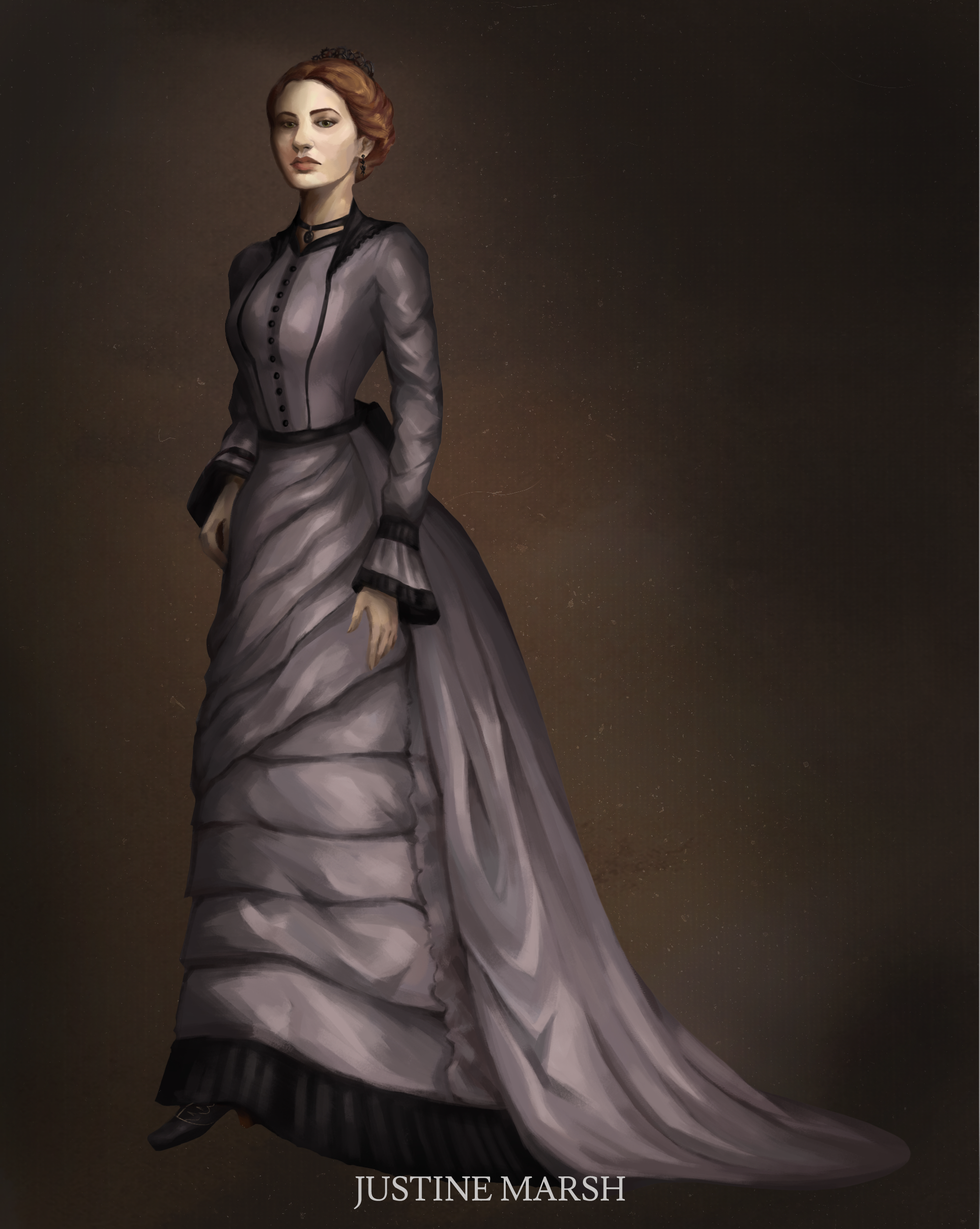 Speaking of reasons to be, Justine’s first two husbands, Anthony Winterbourne and Everett Marsh, began as just that.  I needed to play around with surnames to keep Sidney Winterbourne’s true identity (as Greg’s son and George’s half-brother) under wraps for the first half of the story.  By having Justine as Justine Marsh at the beginning of the novel, you wouldn’t associate her with Sidney Winterbourne.  This meant, however, that I had to make Everett Marsh her second husband. It also meant that I had to give her a prior husband, Anthony Winterbourne, to serve as Sidney’s “father”.  And it’s Anthony I’ve been working on these past few days.

Anthony Winterbourne is a tricky character to work on because he’s not part of the main story and I can’t deviate from the main group of characters and their plot at his expense.  He has a very narrow time margin, between Gregory’s death and the early stages of Justine’s pregnancy, to show up and marry Justine if (a) he’s to remain in the dark about Sidney’s paternity and/or (b) no one else is to suspect who Sidney’s biological father is.  Anthony and Justine’s courtship must be short and sweet.  And yet, as I create him, I realise he must have a greater purpose to the story.  He is quickly acquiring that purpose.  As Bertie’s nephew, he, in relation to Justine, is subject to the effects of her secret stealing.  As the son of John and Sarah Winterbourne, Bertie’s sister and brother-in-law who live in Portsmouth, the port town from which the British ships leave for Veracruz in Mexico, he is a link to Gregory’s Mexican back story (a very ill Gregory stayed with John and Sarah for a month upon return from Mexico, a fortnight of which Bertie was present to nurse him and steal his Mexican secrets).  As a character who was around Gregory at that vulnerable time, Anthony is able to tell Justine things about Gregory she didn’t know; Anthony keeps him alive for her.  As the husband of a woman still in a relationship with a ghost-lover, Anthony is a conduit through which to convey all kinds of relationship issues including betraying a figment through physical infidelity, betraying a real-life partner through psychological infidelity, being content to live in ignorant bliss around the darkness innate in other people and the list goes on.  I’m making him young, handsome and likable and, so far, the two main things he brings to Justine’s life are music and his love of the sea. So, Anthony Winterbourne is an integral part of the web and even if he doesn’t take up too much page space, the space he occupies must be meaningful.  I’ve haven’t thought much about Everett Marsh yet.  At this point, I don’t think he’ll be too important, but then again, that’s what I thought about Anthony a month or two ago.

I want to take a minute here to talk about language for the Victorian era chapters.  I am aware that the Victorian characters aren’t always speaking like Victorian characters would’ve spoken.  But remember, it is Aubrey Holloway, a 22-year-old, modern-day woman who is channeling them; Aubrey is interpreting them for you.  If I (as Aubrey) were to be completely true to the Victorian way of speaking and describing things, I’d lose you as a reader and Aubrey would lose Phil for sure.  So, the aim is to keep the nineteenth-century vibe with expressions and words like “very well”, “by Jove”, “much obliged”, “truly”, “consider”, “spasm”, “beguiling” and “I’ll wager” whilst ditching the long, ornate descriptions with which the real Victorians expressed themselves both in speech and in writing.

With regards to Phil, I am now 90% certain his affair with Jeannie is going to go.  I’ve been handing out affairs as if they were Hallowe’en candy and it’s time to take Phil’s away from him.  Besides, I need an affair for someone else in the novel so, unless that remaining 10% starts spinning in my brain again, Phil can remain safe in the marriage department.  And, to be honest, Phil’s got so much going on.  Once I get back to him, he’s going to be hammered with one epiphany after another and his life will be hanging in the balance.  The Phil context as a whole, however, is non-negotiable.  While he’s on a back burner for now, he is absolutely necessary to the story.  And, as I mentioned in a previous post, the dream he’s given up is important.  I’m going to post that chapter here in the process section very soon.  Looking to the future, I’m going to be dedicating myself to the large Victorian sweeps of time and then, I’ll be going back to re-write my Phil sections to bring them in sync with the Victorian story (this may mean toning down some of the Phil silliness).  This will also mean I will have to carefully map out Phil’s reading time. He may not be able to get through Aubrey’s manuscript in one night.  I will say, however, that there will be a location change for Phil as he will be leaving the station and heading out to Rosegate to do some investigating of his own to see if he can find physical evidence to support what he is reading.

And finally, in terms of the project itself, Christine is busy working on the portraits of Gregory and a young Justine Walcott (as maid of all work).  Those should probably be up on the site by mid May.  I am busy filling in some of the gaps in the Gregory/Justine/Bertie/Anthony/Sidney thread.  It’s looking now like George won’t be showing up in the first person until late Summer, although he will be appearing through Justine’s narration and you’ll be able to get little bits and pieces of his relationship with Sidney through Justine’s eyes.  At the end of this week, I’ll be posting a very short chapter on the “chapters” section of the website, but the following week, there’ll be a double-chapter feature dealing with Justine and Bertie’s trip to London.